My ride along the Great Continental Divide has been plotted and stored in my newly acquired & installed (used) GPS. Now then, let’s talk about distances. The GPS route was plotted by a few people who have made this trek several times. It’s broken into bite sized pieces with waypoints — fuel destinations. The average distance between waypoints is just over 100 miles, which the stock DRZ can almost manage. One distance between waypoints, however, concerns me.

As I mentioned, the route has been planned by aficionados, so I’m not inclined to change it. Attempting 267 miles non-stop on a motorcycle designed from factory to have a fuel range of ~90 miles does sound like fun. But, I’ll need to be more cautious and add some safety measures into the equation.

The first item on the agenda is to increase my fuel carrying capacity. Three months ago I swapped the DRZ’s factory 2.6 gallon gas tank with something larger. It’s important to note that larger, in motorcycle terms, usually means uglier. Especially on my budget. I’m pretty sure I landed the ugliest aftermarket gas tank you can find. But, not bad ugly… more like Mad-Max-might-blow-up-but-super-practical-cool ugly. The fuel range has vastly improved. My most recent tests leave me confident in a solid 160 miles of range, which is a 70-mile boost. In the next paragraph I hope to extend the range to 175 miles without adding a single drop of fuel.

For now, enjoy this monstrosity. 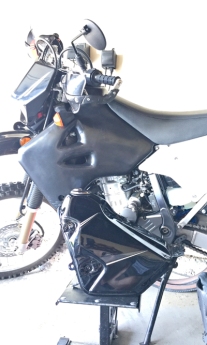 How to get better range with no additional fuel? Change the gearing ratio! Motorcycles have two exposed sprockets (like a bicycle) that are changeable. The one that has the greatest effect for my needs is the front sprocket, also called the “front countershaft sprocket.” It’s directly connected to the actual gears inside the engine (5 of them). A small change in the front sprocket has a big effect across all 5 gears inside the engine.

The fella I bought the bike from installed an aftermarket front countershaft sprocket that had 14 teeth. This is one tooth smaller than factory. His goal was to shrink the diameter of the front sprocket, which would create more low-end torque, but less top-end speed. Think of the lowest gear on your bicycle – great for getting up steep hills, impossible to go fast without a ton of effort (and looking really stupid). I yanked the 14-tooth front sprocket and re-installed the 15-tooth factory sprocket. In untechnical terms, this will effectively stretch each of the 5 gears out, make them a little longer. This results in less strain on the engine and better fuel economy. Before the change, my top speed was around 70 mph. Now, it’s around 85 mph. I estimate this will result in a 5-10% boost in overall fuel economy.

I forgot to take photos of the sprocket change because lots of beer and good company. Ride on!

2 thoughts on “Gearing up to go the extra mile”